‘Surprise announcement’ raises concerns of rushing forward with a PPP. 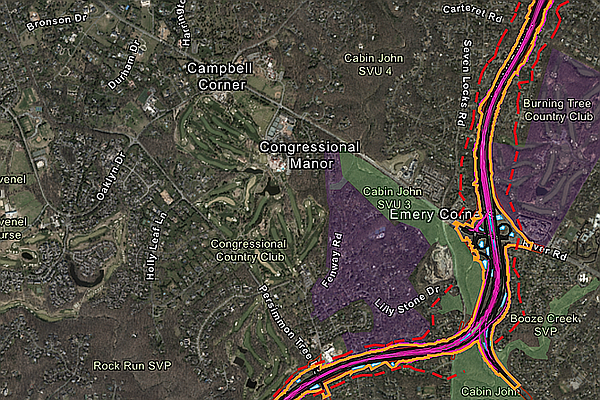 Hundreds of people testified against Gov. Larry Hogan’s proposed public-private partnership to build toll lanes – nearly 83 percent of responders voiced disapproval – but the Maryland Department of Transportation chose the option to add four toll lanes to the American Legion Bridge and up I-270 as the best choice to mitigate traffic congestion.

“In addition to delivering significant congestion relief in the existing free lanes, this Recommended Preferred Alternative provides Marylanders with new travel options including free use of the new managed lanes for carpoolers and transit riders, new bike and pedestrian connections in the community and across the Potomac to the C&O Canal, and a consistent reliable transportation network for the entire National Capital Region from Maryland into Virginia," said MDOT Secretary Gregory Slater.

Citizens Against Beltway Expansion wasn’t as sanguine, with its response.

“Today’s surprise announcement of a design for $11 billion I-495/I-270 Luxury Lane means MDOT is putting taxpayers and communities at unnecessary risk by racing to approve a design, a developer, and toll rates months before there’s a Final Environmental Impact Statement to show whether the project is even viable,” according to CABE. “Although the [Final Environmental Impact Statement] isn't due until Fall, the developer is expected to be announced as early as Feb. 1, a ‘progressive pre-development agreement’ with the developer locking in the current plan will go to the Board of Public Works in the spring, and toll rates for the I-270 Luxury Lanes are scheduled to be voted on by Maryland Transportation Authority in the summer.”

Stewart Schwartz of the Coalition for Smarter Growth cites the Transportation Planning Board’s once-in-a-decade Regional Travel Survey, which helps paint a detailed picture of the daily travel patterns of people in this region. The survey was released last week.

MARYLAND NATIONAL PARK AND PLANNING Commission staff opposed the project moving forward based on the Draft Environmental Impact Statement, raising serious deficiencies in the plans. Main issues are impacts on parkland, wetlands, streams and other aquatic resources under the Maryland Clean Water Act, as well as inadequate definitions of limit of disturbance, compliance with social equity law, and evaluation of stormwater runoff.

“We cannot agree with the direction of the Managed Lanes Study until our land use, transportation, and environmental concerns are addressed, and that just hasn’t happened despite months of trying to get answers,” said Casey Anderson, M-NCPPC Chair and Montgomery County Planning Board Chair in October.

Local impacts for Potomac and Bethesda would be significant, and still are not defined.

River Road is one of the locations the state recommends providing direct access to the toll lanes, raising the possibility of adding another lane in the middle which would ramp up to River Road.

A renovate American Legion Bridge should include room to carry a shared-use trail for bikers and hikers, like the Woodrow Wilson Bridge, but it’s not clear how that would access the C&O Canal National Historical Park and the towpath as mentioned in last week’s announcement.

There is the question of the Moses Hall Cemetery in Cabin John at Gibson Grove Church. Will Jawando, county councilmember at large, visited the site already too close to the Beltway by Seven Locks Road. “I stood and could literally feel the wind from the cars swishing by as I looked down at a marker, a red flag where dozens of African American bodies are buried. We know this community was decimated once with the Beltway,” which separated the church from the cemetery, said Jawando in October. “And here we are considering under the current plan disturbing the resting place of these folks again, in a plan that is not ready for prime time. I think that is abhorrent. … It has been suggested by State Highway Administration that we may need to move some bodies. No, we will not move those bodies,” he said.